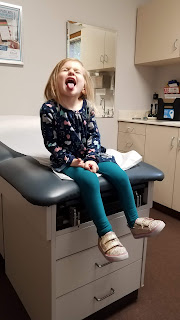 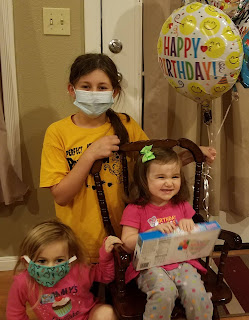 After doing a quick celebration for Craig and Jen's birthdays on Sunday night, Craig got Addison and Jenson settled with my parents and we left Sedalia at 2:30.  Emerson was supposed to be on a clear liquid starting at midnight, so we gave her a tylenol then.  She slept for the first hour and a half, only waking up when I hit big bumps (bridges have the worst bumps), but then as the medication started wearing off she was getting really uncomfortable, so I called the 24 hour nurse (she has become my friend) and we gave her another tylenol.

I thought Emerson might freak out if she realized she was having another surgery, but it must have been pretty uncomfortable because she didn't.  She was however determined to tell the doctor what part he needed to fix and did show him the specific spot.  Craig took her back to the surgery room and she held the "sleepy breathing treatment"  all by herself. 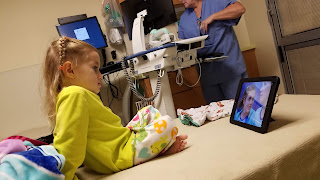 We were pleased with the apologies and explanation about what happened. Initially he thought something may have twisted and gone wrong at the very end of her surgery, but after the surgery he said there was evidence that the bottom hooked had "broken through the bone."  He explained this as being similar to two doors opening and then closing right away.  He said it will heal and is not a huge concern.  He has over 50 kids that have had Magec and this has never happened right away like this.  His thought is that he corrected it too much and her bones are too soft, so this time he did move the hook down and didn't correct the curve as much, in hopes the bone will hold it.  The longer it is there, the stronger it will get and he can correct it at her lengthenings.  He answered a million and one questions for us and mentioned that what we do for Emerson in the future may not even be invented yet because the research in infantile scoliosis has really grown in the last 5 years and will continue.

The surgery was not near as long this time.  We were back in recovery with her after about 2 hours.  She did wake up mad at the nurses but after Craig told her that she had to do what they said so she could go home, she cooperated.  They did admit her and we stayed until she was eating, drinking, walking, and using the bathroom.  Then we left right after a dose of medication.  She was a champ.  She got right up out of bed and told them she didn't want the wheelchair and walked down to radiology for her xrays and pictures. Then she wanted to go to the playroom to see if she could paint something.  She chowed down on some mac and cheese and was actually being nice to the nurse she didn't like from last time. 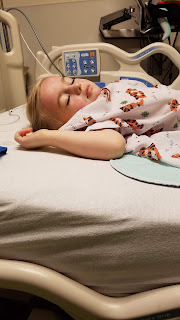 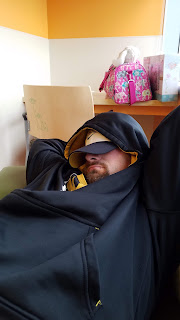 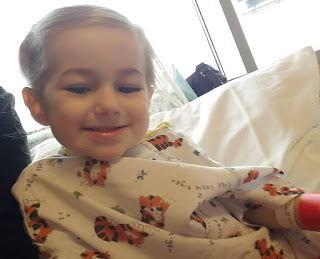 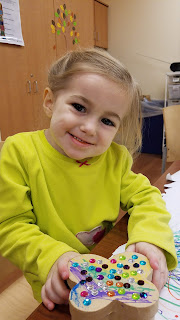 The trip home was in snowstorm.  She did sleep the majority of the way and we were home by 7.

She had a really hard time going to sleep at bedtime, until we gave her the valium but slept pretty good throughout the night.  We are back to getting medication every 4 hours so waking her up a couple times during the night is tough but she shouldn't need the pain medication as long this time.

Throughout the day on Tuesday she complained quite a bit that her back was stinging and hurting.  I spent most the day trying to keep her distracted with new toys and games and helping her move from her new recliner to the big recliner, to the bean bag, to her bed, to the couch and then back again.  It's so hard when nothing you do helps her feel better, but this should pass quickly. 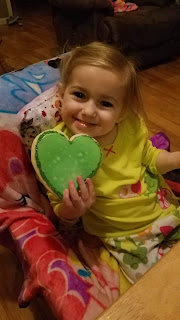 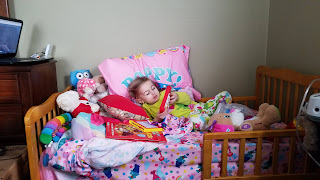 She got to vidoe call her daycare friends and then decided she was going to go see them.  For the past 2 weeks, I have had to find someone to sit with her or someone to pick up Addison and Jenson because getting the car with Em has just not been an option, but we did it today.  She rode to daycare and then decided shew as going in.  Seeing everyone was uplifting for her. 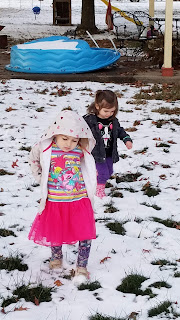 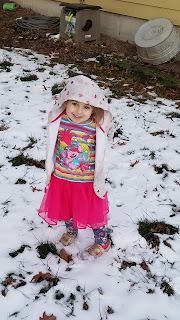 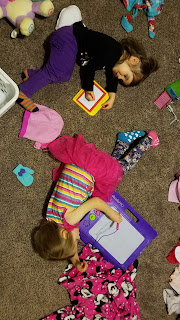 We are planning for her to try some school/daycare next week.  I will be home with her again tomorrow and then starting Thursday Craig will stay home and go in to work late, leaving as soon as I get home from school.  It isn't going to be easy, but I have to get back to work.

Dr. Luhmann wanted to keep our original follow up appointment on December 4th, so we will go then to make sure everything is in the correct places and healing well.

Our prayers right now include, the hooks and rods staying put and not breaking through any bones, Emerson to recover quickly and feel good, and for her to continue avoiding infection and pneumonia. 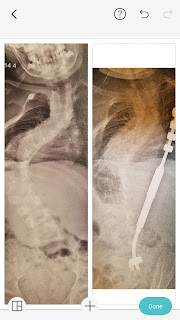