Emerson has had a hard time sleeping recently.  She also fell off the seat of a picnic table and hurt her back so we have been concerned that something wasn't right.  The x rays showed that everything was fine and Dr. Luhmann lengthened her rod another 4.1 mm.  She is doing great!

Since May Emerson wakes up in the middle of the night screaming.  She tosses and turns and grabs at her back most nights.  This happens at least 3 times a night and is heartbreaking.  We have been very concerned about it but during the day she seems fine.

Last weekend, Emerson was sitting on a metal picnic table and somehow slipped and her back slid down the seat as she fell to the ground.  Since the rod and screws are right under her skin, this hurt pretty bad and left some nasty bruises.  We were concerned that the fall may have hurt something on her rod or the bruises would prevent the lengthening.

Emerson has enjoyed many things this summer already, including t-ball and swimming.  We had a hard time deciding about the tball, because we just don't want to risk her getting hurt, but ultimately decided to do the morning session with less kids and were happy with that, because she loved it.  The downside to t-ball and swimming is that everytime we do those, she needs a pain reliever at night or she can't go to sleep. 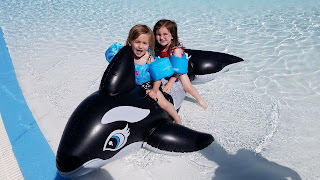 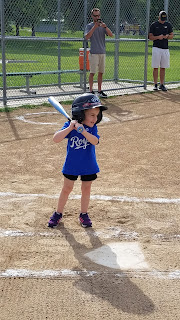 Our appointment was Tuesday at noon.  The pre x ray showed everything in it's place and so we did the lengthening.  He moved it 4.1 mm and we go back again at the beginning of October. 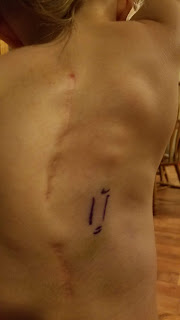 While we were their he said he thinks she is having night terrors about her past surgeries.  He wrote her a prescription for a memory foam mattress, because our insurance company acted like they could help with that.   We also asked about the rib hump because it seems to be getting worse and he said it isn't hurting anything and will be addresses later on.  He also told us he would prefer her to be doing the swimming and other exercises and having to take the pain medicines that not exercising.

We always agreed to let them use Em's measurements for the purpose of research but this appointment was the first time she could sign off on that. 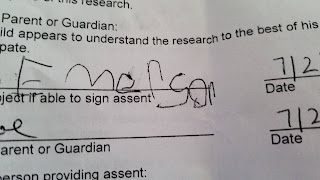 We were very relieved that everything was okay and we hope to continue enjoying the summer!  We appreciate everyone's prayers as Emerson continues this long journey.