February 09, 2017
The plan was to keep Em healthy for 4 weeks and get a cast on February 7th.  We almost accomplished that, but failed miserably at the last minute.

Sunday, February 5 it was unseasonably warm.  Addison and Emerson went outside to play for 15 minutes and both entered the house with a runny nose.  Monday morning Emerson's nose was still runny, just a little bit.  We did a couple breathing treatments throughout the day Monday, she seemed fine.

Tuesday, my mom came to the house to take care of Addison and Jenson, and we left at 3:30 am.  As we got to 5 highway, Em said she needed a treatment.  Yes, my 2 year old knows when she needs a treatment.  I don't know if that is impressive because she is alert to it, or sad because she has to be aware of it.  Either way, we take the treatment bag everywhere and we gave her a treatment.  No big deal, until 45 minutes later she started coughing again and said, "I wheezing real bad.  I need treatment."  That's when we knew, the cast probably wasn't going to happen, but we were already headed there and they were expecting us, so we continued.

When we entered the surgery area, the nursed and anesthesiologist were very alarmed by her breathing.  Her O2 levels were at 95 and so they gave her a treatment.  They seemed to think it wasn't safe for us to leave but after a treatment, and us agreeing to go to her pediatrician when we got home and stop at a hospital or urgent care if needed, they let us leave.  We had one albuterol left and decided it would be better to just go straight home instead of trying to find a Walgreens and seeing if they could fill part of her prescription from Sedalia.  When we left Shriners her O2 was 96.

The ride home was long and very uncomfortable for her. 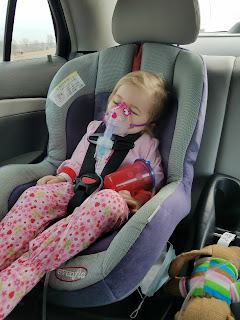 We went straight to the doctor's office, but when we got there we knew we where headed to the hospital. At least it would be straight to a room instead of going through the emergency room.  Her O2 was 88 by this time.  They gave her a treatment and off to the hospital we went.  The xrays showed no pneumonia, which is wonderful because that would have delayed the casting for 4 weeks.  She was diagnosed with asthma complications and given oxygen, fluids, steroids, and an antibiotic (as a pneumonia precaution, I think).

Here is a video of her breathing after being in the hospital for 5 hours.  Sorry for my horrible one handed camera skills.  Emerson's Breathing

She is hopefully going home today, after staying 2 nights.  The casting will be rescheduled ASAP after she is cleared from Dr. Cahill.  Unfortunately, the casting may not be with our doctor because of scheduling.  Instead it would be with one of his partners.  We don't know how we feel about that.  They seem to really want her in a cast as soon as possible, like we do, but we really like Dr. Luhmann and are confident in his skills.

We are asking for prayers for Emerson to be cleared, us to make the right decision for her regarding the casting and doctors, for a healthy Emerson (so we can get a cast), and for improvement when we finally get the cast (we really need to get her spine off her lungs).

Thank you so much for all the support!  Everyone is so kind and helpful!