In May we had our check up with Dr. Luhman.  The xray in her brace was 64.  Since we began in the 70s and had casted down to 50, I was worried, however, he said it was fine.  He wanted us to let her enjoy her summer.  So, we did! She swam, got filthy in the garden, played in the rain, ate lots of messy ice cream and popsicles, took long baths, and many other things that we wouldn't have been able to do in a cast.

In June we hit a speed bump.  Emerson seems to have some allergy issues (I think I may be at fault for passing that down to her).  The last week of school she had developed bronchitis, which we fixed with an antibiotic.  Three weeks later she developed pneumonia.  She had been struggling with some minor allergy drainage and a little cough.  Nothing that I thought was a concern.  We took her to watch her sister play a late night softball game and within an hour of being home she was awake, screaming, grabbing her chest.  After being up all night with her, hanging out in the steaming bathroom as much as possible, we got a noon appointment with Dr. Cahill.  She was a bit shocked at the quickness, since she was at the ball game the night before and saw Emmi playing and laughing like normal.  We were sent straight to the hospital and spent 3 days getting antibiotics, breathing treatments, and steroids.  Emerson was such a good sport about this especially since she doesn't really like hospitals.  If anything started beeping, she would say, "Uh, oh!" and look for the nurse to come in.  If her oxygen tube fell out, she would try to push it back in her nose.  The staff at Bothwell Regional Health Center took really good care of her and we were released to go home.  We also received some really nice gifts while in the hospital.  The local Lion's club had a whole bag of goodies for Em to play with and stuff for us to do while in the hospital.  Dr. Cahill felt like the pneumonia developed so quickly because of brace restricting her from breathing deeply.  Dr. Luhman's office said that her curve wasn't severe enough to cause that, but to not wear it while she was recovering.  Lots of mothers in our support group say there is definitely a link between infant scoliosis and breathing issues.   We do know that anything with her breathing isn't something to overlook and needs to be taken seriously. 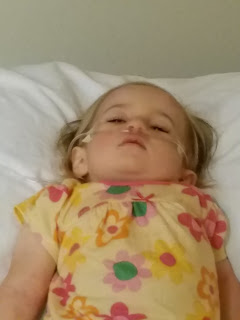 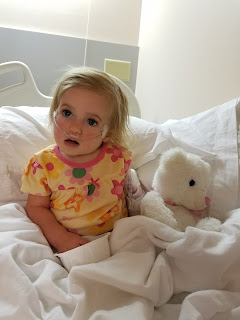 During our hospital stay, we used a defibrillator and purchased one to take home.  Thank goodness!  Throughout the summer we used it periodically when she was struggling to breath.  In September, we had attended a birthday party in Springfield for Emerson's cousin.  She had been dealing with some allergy problems so we did a treatment before we left but didn't take the machine with us (BIG mistake).  She seemed fine after playing at the park.  We decided to go to Gordman's and then Lambert's before we headed home.  The girls raced from the store to the car after leaving Gordman's and Emmi immediately started coughing.  While at the restaurant the coughing continued and then she threw up.  As we put her in her car seat, she flipped out:  coughing, screaming, grabbing her chest and could obviously not breath. It was almost 10 o'clock, but I called my brother (who has asthma, as well has his wife and son) to see if we could make an emergency stop to borrow a treatment.  We were 10 minutes away from them and it seemed like the longest 10 minutes ever.  I should have had Craig drive, but he was busy holding her hand making sure she was still breathing.  If Scott hadn't been available we would have ended up at the hospital.  Lesson learned, always take the machine with us.  Between Craig having activity induced asthma as a kid and the thick presents of asthma in my family, in addition to her spine pushing on her lungs, it seems the poor girl will have to deal with asthma in addition to her other issues.  My biggest concern for this is how that will effect future casting.

Speaking of Dr. Luhmann and our support group, we have recently been reminded of how awesome our doctor is.  He was recently named the head of surgery at Shriner's hospital.  Other parents have said that he has had a long waiting list for a couple years, so we are not sure how we were able to get into him so quickly.  He is known as one of the top surgeons for congenital scoliosis and other Shriner's hospitals send severe cases to him.  In our support group we are often asked about our experience with seeing him and have found a couple families to visit with that also see him as well as stories of kids that have already had surgery with him.  We truly feel like Emmi is where she needs to be!

We were asked to share our story at the recent Shriner's meeting and were able to express our gratitude to some of the Shriner's for sponsoring Emerson.  For our three castings, numerous xrays and tests, and all of our appointments we have paid a minimal amount.  They turn it all into insurance, but the out of pocket is very minimal because the Shriner's organization pays for much of it.  They also provided us with supper at the meeting and gave both of our girls lots of attention.  We are very thankful for this group of people and the wonderful things they do for kids in our area, especially little Emerson.
\
Struggles

I don't get weak often, but sometimes things are just hard and unfair.

We know we are blessed and that we are where we need to be.  Emerson has many struggles ahead, but she is strong and this will only make her stronger.

Our next appointment is in November.  We expect to get the news that we are casting again, but can't be sure.  I feel like the rotation is sticking out further, but Dr. Luhmann has told us that as she grows and loses her baby fat the scoliosis will look worse,  We will see in November.  Until then, prayers for correctly growing lungs and heart are appreciated :)